Women and resistance in Kashmir. By Yogesh Mishra.

While looking for some material on women and resistance in the context of Kashmir conflict, I came across a ‘call for resistance poetry’ celebrating Kashmiri Women’s Resistance day. This blog on Kashmir Lit says “23rd February is observed as Kashmiri Women’s Resistance Day. The day commemorates the survivors of the mass rape and torture in the two villages of Kunan and Poshpora in Kashmir. The survivors from Kunan and Poshpora have become an iconic symbols of Kashmir’s struggle against the Indian rule”. 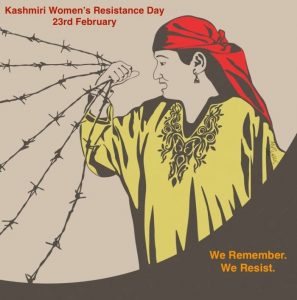 There is no other way of putting it, the Kashmir conflict is a lived reality, an everyday struggle embedded in the lives of those thousands of men, women, and children, who have been living in one of the most contested zones in the world. A constant struggle and resistance between the state and Kashmiris have marked this place with vagaries of human nature; a landscape dotted with army bunkers, barricades, security checkpoints and several other apparatuses of surveillance and control.

The armed insurgency in this region broke out in 1989. Although women were not a part of this armed insurgency, they were at the forefront supporting the militants. For example, writing about Kashmiri women’s expressions of resistance situated in the realm of the everyday, Rita Manchanda (2001) notes that women will sing songs of celebration, intertwining couplets in praise of local mujahideen (militants)….their voices excitedly shouting “oh, you holy fighters, rise and awake! The time of your martyrdom has come” (p. 50-51).

Kashmiri women were always a part of the movement even before 1989. Way back in 1947, when Kashmir was under attack by Pashtuns from Pakistan’s North West Frontier Province, women of the valley participated in the war against the tribesmen. During this time, under the leadership of Sheikh Mohammed Abdullah, Women’s Self-Defence Corps (WSDC), a women’s defense corps was formed. This volunteer force of women was planned to train women for self- defense and to resist invaders. Zooni Gujjri a milkmaid, became famous as a WSDC volunteer, dressed in traditional Kashmiri clothes and carrying a gun around her shoulders; she symbolized the WDSC (Khan, 2010). 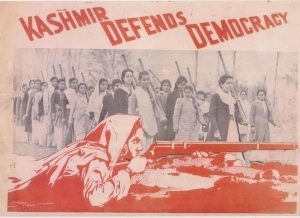 The above pamphlet portrays a picture where Zooni is carrying a rifle as a part of women’s militia. Although a lot has changed since then in the socio-cultural and political landscape of Kashmir, women are still an integral part of the resistance movement and have been participating in different ways. For example, Parveena Ahanger, founder of Association of Parents of Disappeared Persons (APDP), have been holding the sit-in protests for the last 24 years. The Indian Armed forces picked up Parveena Ahanger’s son in 1990, never to be returned to his family. Fighting against such injustice, she has brought people together to seek justice – asking questions about the whereabouts of the victims of enforced disappearance.

In 2017, the protest movement witnessed a new turn where college girls were witnessed clashing with police and throwing stones at security personnel. The following picture captures one such moment of strength and resistance by the women in the valley. These young women were called as the new face of protests. 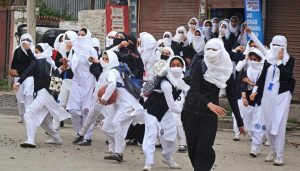 Commenting on the changing scenario, Toufiq Rashid, a journalist form Srinagar, writes: “Instead of running for cover, they picked up stones and targeted the police. Every shell was countered with a scream for azadi (freedom). This was unprecedented. Like their teenaged male counterparts, these girls too seemed to not fear death”.

In the changing landscape of the valley and in the wake of new intifada (some call it ‘radicalization of the populace’) in Kashmir, I see an emerging need to extend the analysis and diverting energies towards accounting for the perspectives of women who participate in anti-state armed movements for self-determination. Scholars like Parashar, Shekhawat, Kazi who focus upon the everyday realities, discuss the invisibility of women in Kashmir challenging the militarised masculinities and contesting the binaries like “agency/victimhood, speech/silence” (Parashar, 2014). Perhaps by focusing on the narratives of lived realities, we can go beyond the already fixed narratives, binaries and can innovate new methodological openings to challenge women’s role as survivors, marginalized, and relegated to spaces of victimhood.

Rashid, T. (2016). Then and now: When girls in Kashmir took to Srinagar’s Lal Chowk to protest. Retrieved from http://www.hindustantimes.com/india-news/then-and-now-when-girls-in-kashmir-took-to-srinagar-s-lal-chowk-to-protest/story-rFDG5Pj00XJpDbxOi8XtPM.html

Yogesh Mishra is a Post-doctoral fellow at the Department of Humanities and Social Sciences, IIT Delhi (India). His doctoral research entitled ‘Beautiful Prison: Geopolitics of everyday life in Kashmir’ focused on the mundane, prosaic, and ordinary aspects of daily life to highlight the constant struggle and negotiation hidden beneath the apparent routine in a conflict zone. His research interests include feminist political geography, sociology of everyday life, and feminist research methods. Yogesh’s postdoctoral research focuses on the representation of marginal groups in a wider context of Indian civil society organizations around women’s rights.