Why is there greater support for gender equality in urban areas? By Alice Evans

The first in a series of short pieces demonstrating the diverse research in gender and feminist geographies. To comment or to write a post yourself, please contact our Web Coordinator, Louise Rondel at l.rondel@gold.ac.uk

Why is there greater support for gender equality in urban areas?

Globally, urban residents tend to be more supportive of girls’ education, women’s employment and political leadership. Why is this? What is it about the urban that disrupts otherwise pervasive inequalities? And what does it reveal about the causes of egalitarian social change?

Rural-urban differences in gender ideologies and practices have been widely observed. Across 20 middle and low-income countries, young urban women are ‘beginning to envision a future similar to young men: education, independence, greater financial autonomy, and shared responsibility for their family’. The prevalence of (and support for) female genital cutting is also lower in urban areas. Further, people with equivalent characteristics (age, education, occupation, marital status, wealth and media access) are less likely to justify violence against women if they live in urban areas of Sub-Saharan Africa. Place matters, seemingly more than education or wealth.

My comparative rural-urban, ethnographic research in Zambia points to two key features of the urban: greater exposure to egalitarian alternatives and greater proximity to services.

Urban heterogeneity (stemming from intersecting migration channels) seems to amplify exposure to women undertaking socially valued roles. Seeing a critical mass of women performing work previously presumed to be beyond their capabilities (such as breadwinners, electricians, mechanics and nurses) appears to undermine internalised gender ideologies. It also signals that other people regard women as equally competent and deserving of status. This seems to foster a positive feedback loop, with rising support for female education, employment and leadership in urban areas.

Importantly, such exposure is not an inevitable feature of the urban, but mediated by economic context. In a context of worsening economic security (structural adjustment in the 1980s, job losses, user fees, as well as HIV/AIDS), female employment is increasingly perceived as advantageous and thereby risen.

Nsenga (41, circular migrant, fish wholesaler): In the village, there are no educated women for girls to look up to, so they don’t aspire for employment.

Annie (45, widow, circular migrant, fish wholesaler): But here in town, there are nurses, teachers, doctors. Girls think, ‘if I am educated then I can be a doctor’. Here in town children see everyone going to school but in the village they just see two people…

Nsenga: Here in town a woman may stop school to give birth, then she will be desperate to return to school and finish. But in the village they just give birth and it’s all over. It’s because of early marriage. There’s nothing else they see and aspire for [translated from Bemba]. 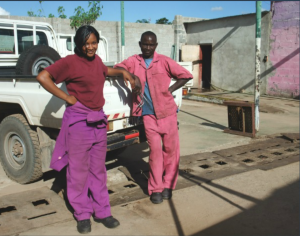 Greater proximity to services in urban areas also seems significant, making it easier for women to control their fertility and secure external intervention against gender-based violence. Rural girls and women are thus less likely to be knowledgeable of, familiar with and financially able to access these services. Rural men may thus be less likely to fear external sanction, and regard government intervention as legitimate.

But proximity to services only disrupts gender inequalities in conjunction with effective policies. It is only in the past decade that the Zambian government and co-operating partners have facilitated more gender egalitarian family planning and police training. As BanaBupe further remarked, ‘the government of Kaunda didn’t legislate that we could take husbands to court. But this time, you lock him up’ [translated]. These changes are partly shaped by shifts in norms and effective feminist organising at the international level. Overseas development assistance for gender equality from OECD DAC members tripled between 2002 and 2012: from $8 billion to $24 billion (OECD, 2014). The disruptive potential of the urban is clearly mediated by national and international gender policies.

What does this tell us about the urban? Characterising the urban as particularly (though not inevitably) disruptive is common in urban geography. But whereas others have suggested that urban heterogeneity merely fosters tolerance of difference, my argument is that urban heterogeneity may erode assumptions of difference (between men and women) and thereby cultivate support for equality. It is not that urbanites cease to condemn outspoken women; rather, they come to champion women leaders.

My theory here is based on comparison with the rural. Weirdly (I think), urban geography tends to focus on the urban. But how can we understand the urban without comparison with the rural? Future research might adopt this same epistemology of the urban and explore the significance of the rural-urban spectrum in other domains: ethnicity, race and sexuality. The disruptive elements of the urban will undoubtedly differ between these cases, but I hope this brief thinkpiece is nonetheless valuable in showcasing the value of rural-urban comparative analysis.

The challenge now is to further investigate when, where and why the urban can be disruptive, as well as how such disruption might be amplified.