The gendered working culture of Aberdeen’s oil and gas industry: A study of women’s experiences of the ‘downturn’. By Georgia Smith

Georgia Smith is the winner of the GFGRG 2016-17 Undergraduate Dissertation Prize.

The oil and gas industry shapes the lives of every person on the planet – socially, economically and geopolitically (Miller, 2004). In the UK, the industry provides more than 70% of total primary energy (Oil and Gas UK, 2017), and supports an estimated 330,000 jobs (Oil and Gas UK, 2016). But it has often been criticised for a gender imbalance in the workforce and a masculine working culture. Today only around 20% of the oil and gas industry is made up of women, with less than 10% in senior positions and 3.6% working offshore (World Economic Forum, 2016; Oil and Gas UK, 2015).

Growing up in Aberdeen, the proudly self-declared ‘oil capital of Europe’, where 60% of jobs are related to oil and gas (Anderson, Park and Jack, 2007), the industry has also profoundly influenced my own life, and my expectations and understandings of ‘work’. I, like most people in the city, am deeply connected to the industry through family and friends who work there, as well as being steeped in the physical space of a city marked oil and gas (see the figure below). It is this connection and my personal observations of an industry dominated by men that lead me to undertake my research. 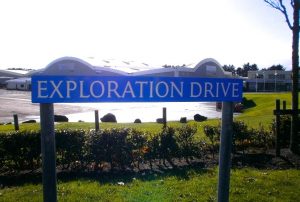 A street sign in Aberdeen – Aberdeen’s history is deeply entangled with that of the oil and gas industry, and street signs related to oil and gas exploration reflect its dominance. (Rushton, 2015)

The economic crisis that has gripped the oil and gas industry over the last two years also made this a particularly interesting time to study the sector. In 2016, oil price reached a low of below $30 per barrel, having hovered comfortably and consistently at around $100 per barrel until a dramatic price crash at the end of 2014 (Egan, 2016). This period is referred to in the industry as the ‘downturn’. There is evidence to suggest that economic crises in general have highly gendered consequences (Grown and Tas, 2011). Little more than two years since the oil price collapse, nothing has yet been written on the gendered impacts of this watershed in the industry. Through my research, I sought to address this gap.

Through a combination of in-depth semi-structured interviews with women in a variety of roles in Oil and Gas and the attendance of industry events as a fly-on-the-wall, I collected qualitative data on a gendered working culture. My research highlighted that Aberdeen’s oil and gas industry remains highly gendered and deeply embedded with notions of masculinity. I pinpointed the gendering of roles and division of labour, apparent in the association between women and ‘social’ roles versus men and ‘technical’ roles (Faulkner, 2006).

“All the guys in the room gave me their orders for tea and coffee… I had to explain I was there to attend the meeting too. It was so embarrassing.” [Ola, Chemical Engineer]

My research also revealed an acute association between leadership and extrovert masculinity (Ko, Kotrba and Roebuck, 2015).

“To be high up in the industry you have to be brash, loud, outgoing and often aggressive.” [Beth, Learning and Development Manager]

“The industry has been brought up to be masculine; it’s what the industry wants” [Leanne, Sales and Transportation]

The everyday perceptions and practices in the oil and gas industry, from commonplace stereotyping and sexism, to conscious and unconscious bias, serve to create and sustain these gender roles (Holmes, 2008). The women I interviewed suggested there was merit in the diversity strategies the industry employs to tackle these inequalities, but crucially, highlighted that material change would not be achieved without a fundamental adjustment in attitudes. They suggested that in order to facilitate real change (see the statistics in the figure below), the effort put into creating a culture that genuinely values diversity, should be at least as great as that invested in policy development.

The representation of women in a major operating company (taken from a shared internal briefing document, March 2016).

By focusing on the oil and gas industry at this particularly challenging moment in its history, my research also served to progress our understanding of how economic crises affect gender dynamics. For example, some women suggested that the downturn had accentuated competitive, extrovert behaviours that serve to marginalise introverted personalities stereotypically associated with femininity (Ko, Kotrba and Roebuck, 2015).

“The downturn has at times driven some quite brutal behaviours actually. That hasn’t helped women to feel comfortable. When people are in survival mode, things get quite hard.” [Mary, Chief Executive Officer]

However, some women revealed a contradictory and perhaps unexpected consequence of the downturn. They claimed that the shared experience of combatting an economic crisis made them feel more included and less marginalised.

“I did an internship in the boom time, the good old days. Everything was a lot more decadent, almost a bit seedier as well, more out of control. Before the downturn, I know they had a team building event and they all went to Norway and went on a speed boat and drank whisky all night… you’d never have that sort of team building event now. It was not very inclusive.” [Emily, Operational Statistics]

Therefore, I found that people’s anxieties over the downturn played out in a variety of ways, sometimes reinforcing a gendered working culture, and other times serving to dismantle gendered stereotypes and barriers to women’s progression.

While my research has suggested that the culture of Aberdeen’s oil and gas industry remains deeply entangled with notions of masculinity, the empirical data collected also points to the possibility of change. For example, a number of women thought the ‘downturn’ provided a genuine opportunity to improve diversity, suggesting that it could be used as a catalyst for the industry to reinvent itself as a modern, forward thinking and more universally inclusive part of the UK’s industrial economy. They suggested that this transformation would attract a diverse range of talented and dynamic women. These contributions imply hope for the future.

Through my research, I hope to have contributed to an important ongoing dialogue and broader struggle, aimed at undermining and challenging sexism and marginalisation in society and particularly, in the world of work. I also hope that my research, in some small way, sheds light on the experiences of women working in oil and gas during this period of downturn. I am truly honoured to have been awarded the 1st place prize in the Gender and Feminist Geographies Research Group by RGS-IBS, and am really grateful to have my research recognized in this way.

World Economic Forum (2016). Closing the Gender Gap in Oil & Gas: A Call to Action for the Industry. Available at: http://www3.weforum.org/docs/WEF_AM16_Closing_Gender_Gap_Oil_Gas.pdf (Accessed: 25 February 2017)