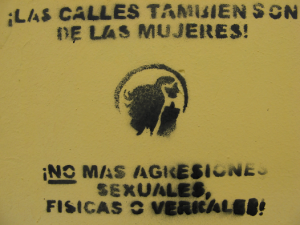 In 2017, women around the world marched against gender inequality. A salient element of gender inequality is gender-based violence (GBV). GBV has been defined as any act “that results in, or is likely to result in, physical, sexual or psychological harm or suffering to women, including threats of such acts, coercion or arbitrary deprivations of liberty, whether occurring in public or in private life” (UN 1993). A diverse body of research on gender and tourism has explored the commodification of children, women and men in the global sex trade (e.g. Cacho, 2015; Davidson, 2005; Jeffreys, 2008; Kempadoo, 2001; Kibicho, 2016; Sanders-McDonagh, 2016). Studies have also explored sexual harassment in the tourism and hospitality sectors (e.g. Cañada, 2015; Cheung, Baum & Hsueh, 2017; García 2016; Guerrier & Adib, 2000; Poulston, 2008; Pritchard & Morgan, 2006; Ram, 2015) and the constraints experienced by female travellers, including violence (Jordan & Aitchison, 2008; Lepp & Gibson, 2003; Wilson & Little, 2008). Research in tourism and hospitality could benefit from a more rigorous theorisation and analysis of GBV. In this session, we are interested in exploring current debates on gender-based violence and sexual harassment alongside feminist movements and their mobilities. The session welcomes papers addressing the following areas:

We are currently seeking contributions for a paper presentation session involving five presentations each lasting around 15 minutes with time for questions. The presentation may be executed in a traditional or innovative style, and we actively encourage a wide range of styles; including snapshots and Pecha Kucha.