Caragh Bennet is the third-prize winner of the GFGRG 2016-17 Undergraduate Dissertation Prize.

At the first world conference on “Women in Development” in Mexico, 1975, the UN declared women to be the ‘so-far unexploited resource for greater efficiency in development’ (Jackson 1992:89 in Aguinaga et al 2013). Women have increasingly been conceptualised as agents of transformation in development for example, Goal 5 of the Sustainable Development Goals is to ‘achieve gender equality and empower all women and girls’ (UN 2015). Women’s empowerment has become a widely used concept and has thus been interrogated for the ways it positions women as subjects of a wider discourse. We therefore can utilise such women’s empowerment programmes as a focal point through which to view an Intersection in literature of women’s empowerment, post-colonial feminism and rural economic development. According to many prominent post-colonial scholars, women’s empowerment projects enforce problematic gender production or lead women to bear a burden of development, thus reducing the agency of identity performance in such settings. Women’s empowerment programmes may unhelpfully reinforce gender inequalities and power hierarchies through the way women are depicted both on the one hand as agents of change, or on the other, as vulnerable objects of aid.

In spite of this critique, it is still possible to distinguish the forms of programmes having this impact in order to avoid sweeping generalisations. Through the analysis of a specific women’s empowerment programme working in rural Uganda, my dissertation studied how it was possible for these problematic implications to be avoided and taken into consideration, and for the agency of women to be increased and prioritised in the model of such programmes. 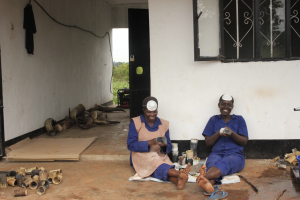 Tribe + Glory is a women’s empowerment initiative currently working in the village of Kamuli, Eastern Uganda. Tribe + Glory represents a form of women’s empowerment model whereby entrepreneurship is facilitated without the more common use of loans or handouts or other financial infrastructure. Instead, Tribe + Glory chooses to use employment as capital accumulation. Female entrepreneurs are interviewed and accepted onto the programme on the basis of having a viable business idea and once admitted onto the programme, a market based approach is utilised, providing members with a full-time job in an artisan workshop. Salaries are then paid to the women on a monthly basis, where 60% of the salary is put straight into savings and 40% of the salary allows the individual to live above the poverty line. Each programme member stays in full time employment until the capital built up in savings is sufficient in order to start their business. Alongside employment, entrepreneurship skills are taught and business mentorship is provided.

Through this medium, the Tribe + Glory model aims to provide a unique access to capital for some of the poorest yet most innovative women in rural communities. Even when financial services are present, female uneducated entrepreneurs face a particularly strong barrier to accessing these services due to lack of knowledge and lack of accessibility from the service provider. Even microloans have been known to be too complicated for the rural poor to usefully access. Furthermore, the problems associated with loans causing risk to women through being in debt have been well documented in the work of Karim (2011). Women may be rendered vulnerable in carrying debt, and even without the risk of loan sharks, insufficient knowledge on how to save to pay back the debt may be an issue. 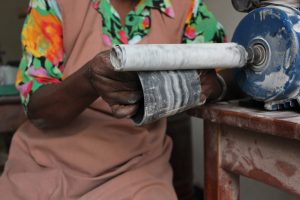 Employment and savings based capital accumulation therefore can provide an interesting alternative for entrepreneurial individuals. Employment provided by Tribe + Glory is within a safe working environment, and with mentorship and personal financial advice, monthly salaries are managed efficiently and productively. Moreover, the post-colonially problematic implications of hand-outs are avoided through the opportunity for women to work for their wage. Tribe + Glory looks to increase the agency of programme members by requiring them to work to high standards of employment and to become familiar with workplace disciplines and protocols. Employment reduces the sense of dependency that women may experience from grant giving organisations as they are offering a valuable skill to the organisation. This promotes self esteem and the ability to contribute or even lead household finance discussions.

Employment over a longer time frame is also effective due to the education levels many of the programme members. Many may have experienced little to no formal education and the period of time spent on the programme enables an opportunity for literacy training, as well as learning commitment and leadership abilities. According to Guma (2015), many women suffer from the primary barrier of self-confidence and a fear of ‘overstepping the mark’ in Uganda, due to existing cultural social expectations of gender performances. Tribe + Glory is geared towards encouraging women to take ownership and leadership over their personal finances, and eventual enterprise.

Through a post-colonial awareness of the problems of female empowerment programmes, Tribe + Glory has sought to create an alternative solution and answer to many of the well documented issues. Tribe + Glory seeks to actively increase the agency of the women they work with through employment rather than loans or handouts. Arguably, this form of programme, if replicated, could lead to an increase in successful female entrepreneurship in rural markets as well as reducing rural poverty.