Re-figuring the city: A feminist walk of London’s monuments to women. By Rosie Martin and Louise Rondel.

… [T]he normative figure of leadership and especially in battle has been masculine.  Women’s inclusion into the nation has been quite specific.  Certainly, ample qualities of stone have been utilised to carve female statues of the nation.  In these, though, women predominantly feature as symbols of virtue, beauty, nurture and justice … It is men, however, who are metonymically linked to the nation.   Women feature as allegorical figures that signify the virtues of the nation.  It is men who literally represent and defend the nation.

The nation’s story is told and retold in those who have been memorialised in stone, bronze and brass in its streets and squares.  London is, in part, made by these statues as well as by those who visit them, pausing to read the plaques attached to them, having their photograph taken with them or indeed passing by without noticing them.

Feminist journalist and activist Caroline Criado Perez (2016) documents that, of the 925 statues listed in the UK national database of the Public Monuments and Sculpture Association, ‘a mere 2.7 per cent are of historical, non-royal women’:

If you’re a woman, your best chance at becoming a statue is to be a mythical or allegorical figure, a famous virgin, royal or nude.

Googling ‘female statues in London’ and taking out those of allegorical figures or royalty – we want to visit ‘real women who have done real things’ – we find sixteen statues (and it must be noted that of these sixteen, thirteen are of white women) and design a walk that takes in eleven of them starting in Gordon Square and ending at St Thomas’ Hospital. 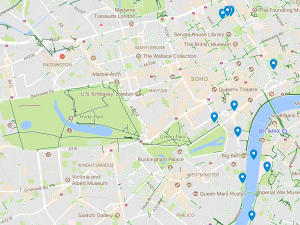 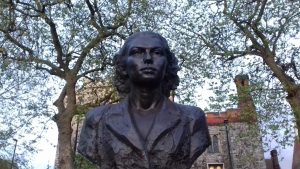 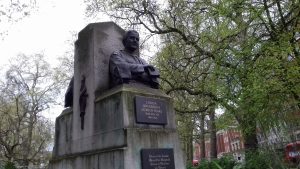 (For practical reasons, we do not visit the statues of preacher Catherine Booth in Champion Park, SE5, a woman holding a baby as a memorial to women of the Caribbean in Stockwell Memorial Garden SW9, musician Amy Winehouse in Camden NW1, actor Sarah Siddons in Paddington Green W2 and ballerina Anna Pavlova at the Victoria Palace Theatre SW1). 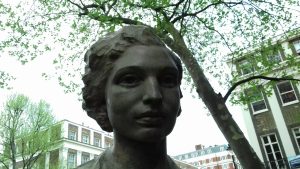 Leaving Gordon Square where groups of people are enjoying one of the first warm spring evenings amongst the blooming flowers and budding trees, we make our way alongside commuters rushing to get to the tube station at Holborn from where we cut through Covent Garden heading towards the tourists and living statues of Trafalgar Square. 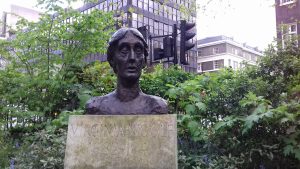 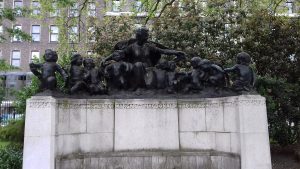 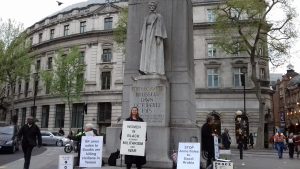 As we approach the tall, imposing monument to Edith Cavell, a German tourist with her son stops to ask us directions to an attraction, and we think through what we know of the area from past experiences here, and check maps on our phones in order to help her navigate accurately across Trafalgar Square and onwards. Surrounding the base of the Edith Cavell statue is a group of real women, older women wearing black and holding signs that reference the lives of women in Yemen affected by UK arms sales.  The Women in Black claim the space around Edith dramatically. As we take a photo of the statue, they ask us who we are, we reply ‘nobody’, explain our mission, then move on too. 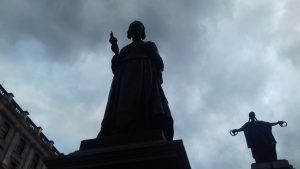 We walk along Whitehall and discuss the last time we were together, standing here at a rally outside Downing Street on a cold January evening to protest Trump’s ‘travel ban’.  Amongst the tourist crush, we arrive at Westminster Bridge, everyone trying to get a photo of themselves with Big Ben whilst we try to navigate around them to get to the statue Boudica, the plaque now hidden by a stand selling London souvenirs. 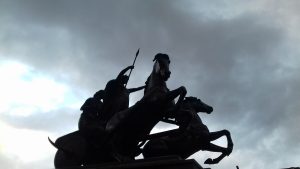 Boudica and her daughters
Queen of the Celtic Iceni Tribe
Westminster Bridge, SW1

We pass through Parliament Square and out to the quiet of the river.  Reaching the memorial to Emmeline and Christabel Pankhurst in Westminster, we speak about the story of Emily Wilding Davison who hid in the crypt of the Houses of Parliament on the night of the 1911 census, so that she could emerge and have her address registered in the House Of Commons. She was indeed enumerated there, and died just two years later when she famously threw herself under the King’s horse. 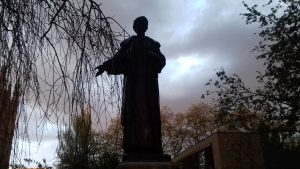 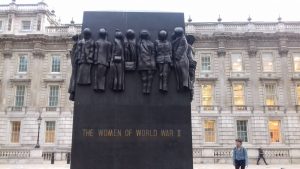 Finally crossing Lambeth Bridge, tired, the light fading and the last few commuters cycling past us back to south of the river, we wander along Embankment reaching the end of our walk at St Thomas’ Hospital. 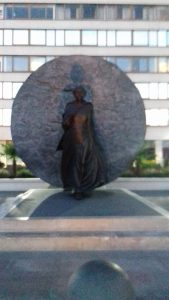 Throughout the evening, we are walking at a different rhythm to those around us, our eyes are drawn elsewhere and our attention is focused on what others are oblivious to as we search for the statues, feeling elated when we find them.  We feel that we are occupying a different city to other people and through this occupation, we are making the city differently.

Rosie Martin is a writer and sewing blogger who makes simple instructions so that anyone can make their own clothes.  She takes a hackers’ approach to clothing, opening it up so the power to make it is in everyone’s hands.  She has written DIY Couture: Create Your Own Fashion Collection and No Patterns Needed: DIY Couture from Simple Shapes.  For more information see her website.

Louise Rondel is a PhD candidate in the Department of Sociology at Goldsmiths, University of London.  She is interested in the relationship between bodies and cities, the beauty industry, sensory methods and feminist geographies.