From the ‘Global Gag Rule’ to Feminist Twitter Diplomacy. ﻿By Dr Katherine Brickell

One in a series of short pieces demonstrating the diverse research in gender and feminist geographies.   To comment or to write a post yourself, please contact our Web Coordinator, Louise Rondel at l.rondel@gold.ac.uk  We welcome posts by all members of the GFGRG. 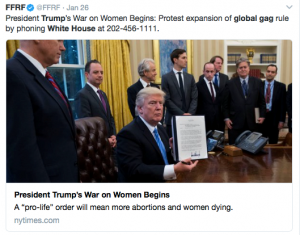 On January 23 2017 President Trump sat in the Oval Office of the White House surrounded by his male staffers having signed a decree. Described by Amnesty International (2017) as ‘a devastating blow for women’s rights’, the ‘global gag rule’ bars US federal funding for all overseas organisations involved in abortion advice or care. The rule – also known as the Mexico City Policy – was first instated by Ronald Reagan´s administration in 1984, and has been traditionally rejected by Democrat administrations only to be reinstated by Republican Presidents (see Crane and Dusenberry 2004 for a historical overview). The rule has significant implications for women living in countries that depend heavily on development assistance for family planning and reproductive health services. Multiple studies in Sub-Saharan African countries haven shown that the Bush administration’s (2001-2009) re-instating of the global gag rule after Bill Clinton’s rescinding of it had a paradoxical effect, resulting in the increase of abortion rates (see studies by Bendavid 2011 and Jones 2011). The ‘Global Gag Rule’ is:

‘an inhumane policy that will undermine women’s rights, damage health systems and increase unintended pregnancies, unsafe abortions, and maternal and newborn deaths around the world. Trump’s Global Gag Rule is an export of domestic anti-woman tactics that will not only severely restrict access to abortion, but will result in health care providers being forced to cut services, increase fees, and even close clinics altogether.’ (PAI.org)

A week after photographs were taken of Donald Trump, Isabella Lövin, Deputy Prime Minister of Sweden, released a Tweet of herself signing a climate law surrounded by her closest female aids, including a pregnant colleague. 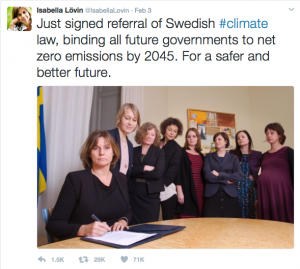 This act echoes a feminist geopolitics that emphasizes the body and intimacy as sites of resistance to a wider politic. A feminist assertion of ‘Twitter diplomacy’ attracting 71,000 ‘likes’ the photograph brings into focus the gendered geopolitics of lawmaking which warrants further attention in future work in order to bring into greater focus the experiences and practices of female lawmakers ‘hidden in plain view’. The example of the feminist politician’s Tweet is one example of how the internet and social media can be harnessed as a means of solidarity building across space, or to quote Manuel Castells (2012), function as a network of ‘outrage and hope’. As my RHUL colleague Alasdair Pinkerton writes with Matt Benwell in their 2014 journal article on creative geopolitics, Twitter and social media,

‘…we might question the kind of geopolitical work these creative geopolitical devices can do alongside ‘traditional’ diplomatic practices and how their production, ownership and dissemination might break down distinctions between formal, practical and popular geopolitics.’

Dr Katherine Brickell from the Department of Geography, Royal Holloway, University of London is the current chair of the GFGRG.