The centenary of women’s permanent membership of the Royal Geographical Society (RGS) was honoured at the 2013 RGS-Institute of British Geographers Annual International Conference. 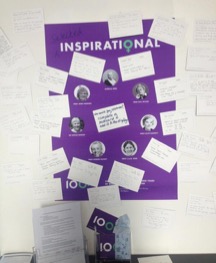 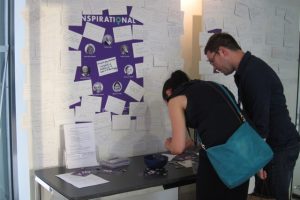 The ‘100+’ sobriquet was chosen to reflect the fact that women’s geographical work predated and extended beyond the RGS award of fellowship, but also signals a forward momentum.

We celebrated the centenary through multiple interventions at the conference. 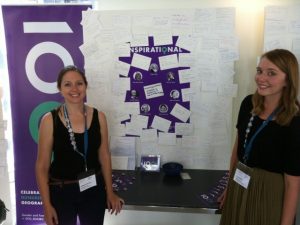 ‘it was amazing, we’ve just been sitting here watching it grow as people have added the cards; people have been adding their postcards and reading others, some people have comeback to read the cards and bring others with them’ [conference volunteer comment on the RGS-IBG AC 2013 pop up 100+ postcard display] 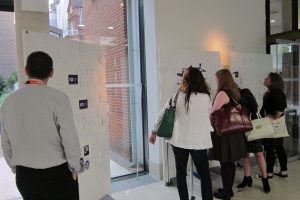 The postcards were emblazoned with the 100+ logo (inspired by the female symbol) and sought to elicit responses to two main questions. The first question asked delegates to ‘Name a woman who has influenced your geographical work/career’ while the second, more substantive question, asked conference goers to ‘provide a few words on how they influenced you’. Over 200 postcards were posted on the ‘pop-up’ exhibition boards in the RGS pavilion.

Badges featured photographic portraits of inspirational female geographers who have played a key role in developing the discipline and supporting the work of women within it:

Cuchlaine King – the third female professor and a physical geographer 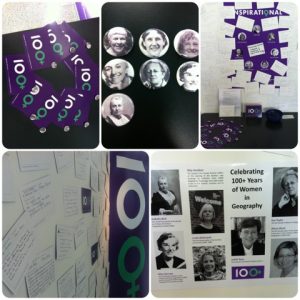 Supported by the RGS-IBG, the 100+ sessions were given a high profile in the conference. Attendees were also able to collect the seven badges produced to mark the 100+ event. These sessions illustrated the diversity of scholarship in gender and feminist geography, with presentation-based sessions themed around comfort, intimacy, mobility, tourism, and justice.

Special sessions organised under the 100+ theme also included an Author-Meets-Interlocutors session for Linda McDowell’s Working lives: Gender, migration and employment in Britain 1945-2007, and a session by Courtney Stephens on the history of female travellers on film, including excerpts from her own film, ‘Eden by Rail’. 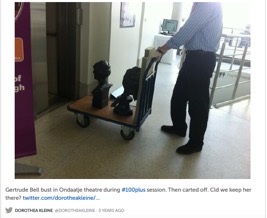 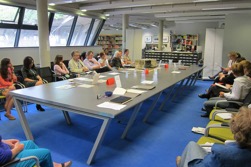 A ‘Gendered Frontiers in Geographical Knowledge and Practice’ session was accompanied by a session in the RGS-IBG Collections, where contributors talked about key objects in the Collections linked to the history of geography and how this has been gendered, and about wider themes that these objects invoked.

A 100+ plenary session focused on ‘Geographical Frontiers of Gendered Violence’. The plenary dialogues have been published in Dialogues in Human Geography (2016). 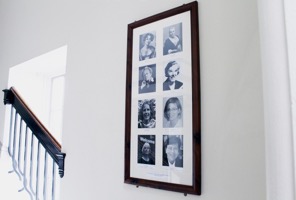 A collective portrait case is now on display on the the staircase up to the Ondaatje Theatre balcony, the Council Room, and the Members’ Room. The overarching narrative of the group collection of portraits of eight different women was ‘firsts’:

Lady Jane Franklin (1771-1874) – organiser and supporter of a series of key expeditions, and the first woman awarded a Gold Medal by the Society in recognition of this important work.

Isabella Bird Bishop – one of the first women to be elected as a Fellow of the RGS in 1892.

Alice Garnett – first female president of the IBG and the Geographical Association (in 1966 and 1968 respectively).

Alison Blunt – first female editor of Transactions of the Institute of British Geographers (2008-12).